I continue to be haunted by the volunteer at the Naval Museum who said that the N3N was a Navy built “copy of the Stearman”.  My recently revised “ABOUT” page (see menu at the top of the page) shows 3-views of the Convair 880 / Douglas DC-8 / Boeing 707 to demonstrate that similar aircraft with similar missions using “best practice” technology from the same era can often look quite similar.  This does not make one a copy of the other.

On the other hand, there is always (well, at least since Kitty Hawk…) a heritage that leads aircraft designers to make the choices that are incorporated into a new design.  I believe that if there is one single aircraft that had the most influence on the design of the N3N, it is the Berliner-Joyce OJ-2, pictured here in sea-plane and land-plane versions:

Why do I say the N3N design team was likely influenced by the OJ?

1. General arrangement – It “looks” like the N3N, although it is a lot larger and heavier.  In fact, the N3N kind of looks like a poorly modeled copy of the OJ-2.  What modelers might call a “stand-off scale”, meaning if you stand far enough away it kind of looks like the original.

2. Convertible – The OJ-2 was convertible for land-plane and sea-plane operations

3. Timeframe – The OJ-2 entered service in 1933 (as a catapult sea-plane aboard Omaha-Class Light Cruisers) so it was newly in service when the N3N design was commissioned.

Production was 39 aircraft.  There does not appear to be a surviving airframe.

Here is the Wikipedia page for the OJ:  OJ-2

I would like to find out more about the construction of the OJ-2. In particular, is a metal airframe?  If anyone knows of any technical references, I would really appreciate a heads-up.

N42745 (bureau #4383) has a new home at Van Sant airport in Pennsylvania.  As the new owners point out, she is based about 50 miles north of where she was built seventy-some years ago.

She is available for rides AND dual instruction.  What a great way to get your tailwheel endorsement!

I recently picked up a pewter N3N hat pin. When it arrived it turned out to be a bigger than I had visualized (I was expecting something dime-sized): 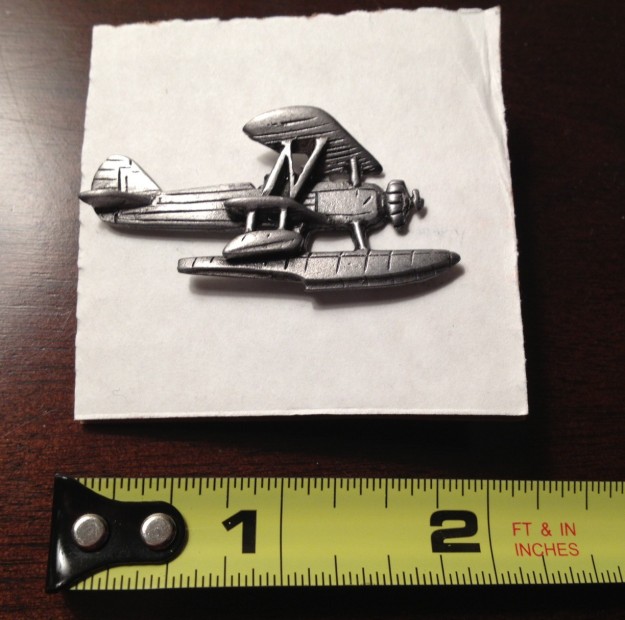