This page has information that I have received about available model resources (plans, kits, etc):

The only current commercial plans that I am aware of are from Montana Model Works. They have N3N plans in three sizes: a Park Flyer size (36″ wingspan), a mid-size (54″ wingspan) and an IMMA size plan at 68″ or 1/6 scale scale (all for electric power), link here:

I have purchased the large Montana Model Works plan, it is on my list of projects.

I also have an old sport scale plan that is floating around the Internet, I believe that it is public domain, I will take it down promptly if I am informed otherwise:

I ran across this project a few years ago. As I recall they intend to power it with an exquisite O.S. 5 cylinder radial engine: 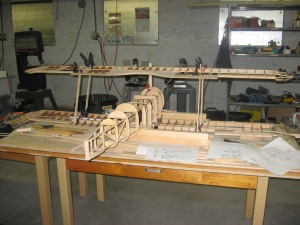 Jim Anderson writes to update me on this model. I got the original photo from him a few years ago but I had lost track of the source:

The first is at Oshkosh in the Warbird area in 2011. Details of finishing were still to be completed: 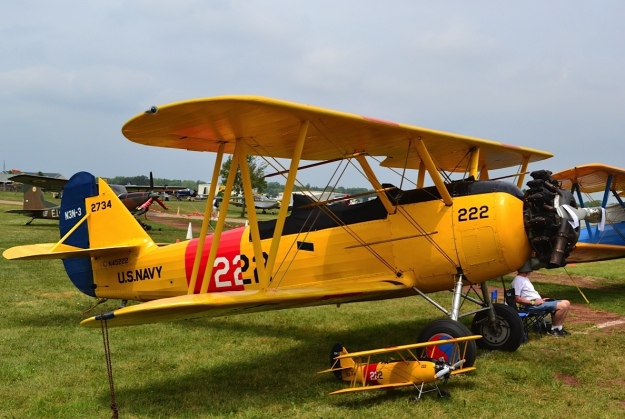 Second shows the framing before covering:

Third is completed but not yet flown:

Fourth is the engine which is an OS Fr300 5 cylinder radial:

[I like the front exhaust collector. It reminds me of the Wright 760 arrangement – ED]

Drawings were made from prints from microfilm factory drawings obtained from the Smithsonian Institute. The project was started in 2007, working together mostly one or two days a week, not counting individual home work. Builders were Larry Cherry, Paul Costello, and myself with some help by others occasionally.

Cool weather negated test flying in Minnesota last fall, and we are ready now for the first flight, with appropriate weather. As I mentioned, I have owned the full size N3N, N45222, BuNo 2734 since about 1976, and it is flying regularly.”

UPDATE:  Mark sends me photos of his model. For those who aren’t familiar with modelling, this is what is called a “bash”. This is where a different model aircraft is used as the basis of the project and is re-engineered (“bashed”) into a different aircraft or version (think P-51D model bashed into a straight-back “B” model).

Mark has put a lot of work into his bash of an N2S (if you know what I mean…) model.  The photos tell the story – reshaped tail surfaces (with bracing strut!), “metal” panels on the port side, revised L.G., 4 ailerons, etc. It even has the socket for the inertial starter crank! Check it out: 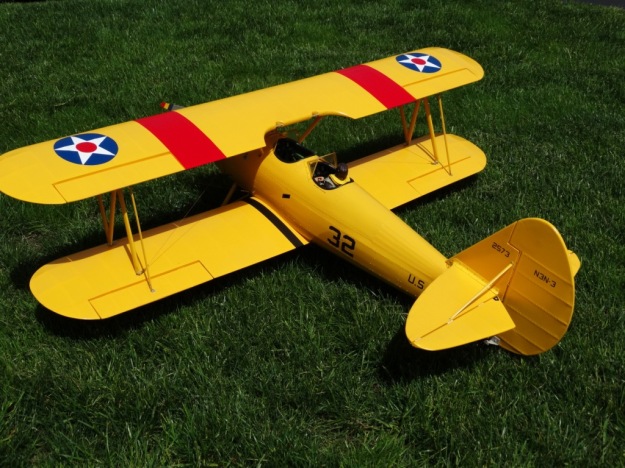 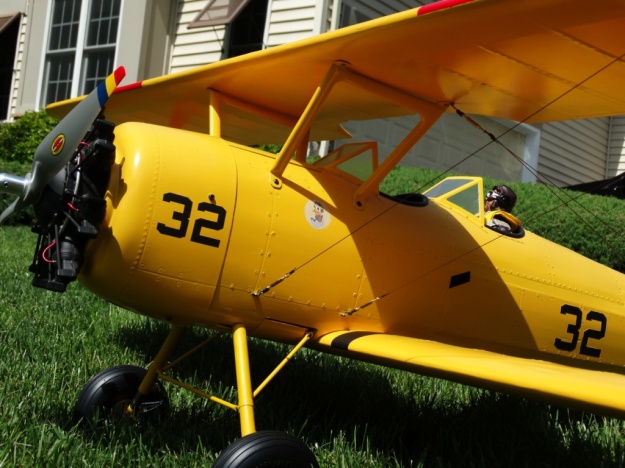 There is an excellent set of 3-Views on the “Documentation” page, check it out…

Comments are enabled on this page, I want to hear about any N3N modeling news below…

5 thoughts on “RC Plans and Models”